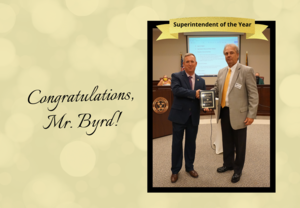 Mr. Mark Byrd, Superintendent of Wilkes County Schools, was named the Region Seven Superintendent of the Year by the Northwest Regional Educational Service Alliance (NWRESA) for 2021-2022.  NWRESA is an organization that provides professional services, staff development and support for public schools in the northwest region of North Carolina.

Mr. Byrd has worked in education for 26 years and is a Wilkes County native. He began his teaching career at the high school he graduated from, North Wilkes High School in 1995.  Since then he has served in multiple capacities such as coach, assistant principal, principal, and central office administration until ultimately becoming superintendent of Wilkes County Schools in January of 2016.  He holds a bachelor’s degree in history and secondary education from Appalachian State University, a master’s degree in school administration from Gardner Webb University, and an education specialist degree from Appalachian State University. Byrd was selected as Elkin City School’s Principal of the Year in 2011.

Mr. Byrd is an effective leader who understands the value of building relationships.  He always puts the needs of our students, staff and community first.  He is very active in our schools, and can be found interacting with students and staff often. He is a passionate educator and an avid advocate for public education.

“This award is not a reflection of me, but of the hard work of the more than 1500 employees of Wilkes County Schools,” Byrd stated.   “They are the ones who deserve the true recognition.  Their efforts for our students during a worldwide pandemic have been second to none and my hope is that the people of our county appreciate what they have accomplished.  I am proud of what we were able to do for our students as well as what we will do moving forward.  The success of anyone in a leadership role is a reflection of the people around them, and this honor is certainly a reflection of the hard work of the students and staff of Wilkes County Schools.”