Teacher and Principal of the Year Named 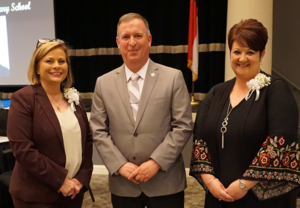 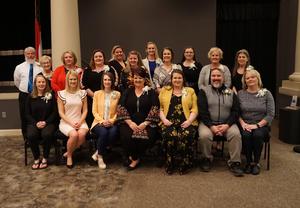 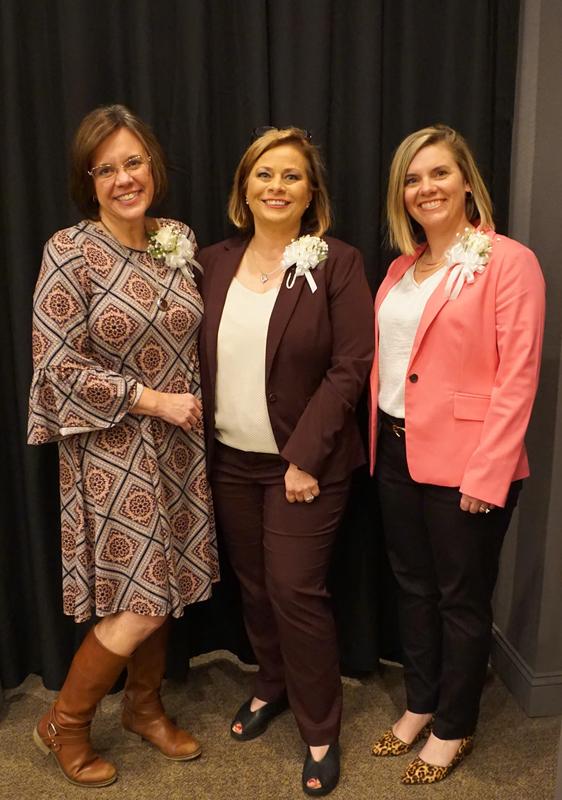 Stone is Teacher, Huffman is Principal of the Year

The new “Teacher of the Year” for the Wilkes County Schools’ “creates a classroom environment that is like stepping into the sunshine on a warm spring day.”

Meanwhile, the new “Principal of the Year “has a true passion for leading and inspiring others to lead,” and is passionate about her faith, family and school.

Wilkes School Superintendent Mark Byrd used these descriptions Monday night when he announced the selections of Alicia Stone as teacher of the year and Pam Huffman as principal of the year for the Wilkes schools in 2020-21. Stone is a Wilkesboro Elementary School kindergarten teacher and Huffman is principal at West Wilkes Middle School.

They were announced at the Teacher of the Year and Principal of the Year Awards Dinner at the Stone Center in North Wilkesboro. Both will now advance to regional competition.

Alicia Stone
In introducing the teacher of the year, Byrd said Stone “works her magic with much praise, patience and a few dum-dum suckers” as she impacts how her kindergarten students feel about school and learning for the rest of their lives.

Byrd said Stone is known for doing what it takes to help every family and child succeed and noted that her “pass catches on to others like wildfire.”

Stone said she is blessed to be able to do what she loves and work in the Wilkes County Schools. In accepting the award, she said children need to know they are loved before they’re expected to start learning.

She taught at Mount Pleasant Elementary from 2004-2014, and has been at Wilkesboro Elementary since then. Stone has served on numerous school district and individual school committees.

Pam Huffman
Huffman said she was blessed and humbled to be named Wilkes principal of the year. She said that as a first-generation college student and with a mother whose formal education ended after the eighth-grade, her perspective was likely different from that of many in the audience. “The one thing my father and my family instilled in me was a hard work ethic. The other thing they taught me is to look for what can be, not what is.”

She is the daughter of George and Elsie Harris of Sparta. Huffman said she is fortunate to have married the love of her life, Gary Huffman, whom she said has always supported her.

Huffman said she saw factories go away from her hometown of Sparta and never return. “I am very passionate when it comes to Wilkes County and trying to make this a better place that our children will want to come back to.”

She added, “We have awesome educators in this room…. I’m so proud to be part of what we do every day.” Huffman said that after the West Middle School drama club performed Saturday, a student in the club who had been through many changes at home this year told her teacher that she was like a second mother to her. “Each one of us do that every day with the people we come in contact with.”

Huffman became a teacher in the Wilkes schools in 1999, was principal at C.B. Eller Elementary from 2011-2014 (where she led the school in implementing the Positive Behavior Intervention Support program) and has been principal at West Middle since then. Byrd said she led establishment of the Leader in Me program at West Middle, which has received multiple honors for its implementation of this. West Middle was named a 2019 Leader in Me Academic Honor Roll School, an award only two schools have received.

She was a finalist for Wilkes principal of the year in 2018. Huffman has a master of arts degree from Gardner-Webb University and at the same school has completed classroom requirements for a doctorate degree, which she is still pursuing.

Other top teachers
Before Byrd introduced the teachers of the year from each Wilkes County school and five finalists, he said no one in a school has a greater impact on student success than classroom teachers. He said the job of a teacher is harder than ever before, but children probably need good teachers now more than ever.

The other two finalists for principal of the year were Dr. Jodi L. Weatherman from Mountain View Elementary School and Heather Melton Freeman from North Wilkes Middle School.

Jolly said her third-grade teacher, Jane Phillips, first exposed her to the idea of becoming a teacher. Jolly said Phillips, although a first-year teacher when she was in her class, “knew the key to learning was caring for and having a genuine relationship with each student.”

Jolly said other teachers in the Wilkes schools inspired her to become an educator, including Pauletta Parker at Woodward Junior High School, who encouraged Jolly to assist her with her exceptional children’s class. She mentioned Ann Parsons and Linda Hale at West Wilkes High School, “who had the patience of Job when it came to helping me with algebra and geometry.

“I’ve always heard that children may forget what you taught them, but they’ll never forget how you made them feel.” Jolly said teachers fill many roles, including as counselors, parents, guardians, mediators and so much more.

He added, “Too often, I’ve lived in the past and thought about the good and the tough times…. We should not worry about yesterday, nor tomorrow, because these are things that are out of our control.” Johnson also said there is a sign on his office door that says, “There is always, always something to be thankful for.”

Car for teacher of the year
Byrd introduced David McNeill, owner of McNeill Nissan and Empire Chevrolet of Wilkesboro, and said he is amazed by the community support the Wilkes schools receive.

McNeill announced that to show his family’s appreciation of teachers in the Wilkes schools, this year’s teacher of the year would have the unlimited use of a 2020 Nissan Rogue from McNeill Nissan for the year ending in March 2021. In addition, McNeill said all employees of the Wilkes County Schools will be allowed a $500 additional rebate on every vehicle they purchase from McNeill Nissan and Empire Chevrolet. The dealerships will service vehicles purchased from them by Wilkes school personnel for free, plus pick up and deliver the vehicles for this work.

McNeill said that in addition to being from a family in the car business in Wilkes for many years, he comes from a long line of educators. “My great-grandfather loaded his daughters up in a wagon and drove them up the mountain to Appalachian State Teachers College and they all taught school here in Wilkes County,” he said.

Teacher of the year process
The teacher of the year process begins by the principal accepting nominations from the school leadership team. To be eligible for nomination, a teacher must hold a continuing professional license and must spend 70% of his or her time in direct instruction of students. After the principal confirms the eligibility of nominees, licensed staff at each school vote and the nominee with the most votes wins for that school.